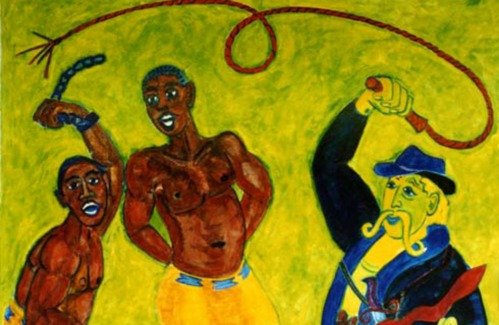 RUTLAND – A federal judge has granted Vermont Law School’s request to dismiss a lawsuit brought by an artist whose law school wants to hide murals behind a wall.

But attorneys for artist Sam Kerson have said he will appeal this week’s ruling by U.S. District Court Judge Geoffrey Crawford to the New York 2nd Court of Appeals.

In its ruling, released Wednesday, Crawford determined that the law school’s plan to hide Kerson’s murals behind a wall of acoustic tiles does not violate federal visual artist rights law. They are currently covered with protective cloths.

Once the wall was in place, Crawford wrote: â€œThe murals will have the same status as a portrait or bust taken from public display and stored.

Kerson and several assistants painted the two 8-by-24-foot murals, which depict the horrors of slavery and slaves escaping to Vermont via the Underground Railroad, in 1993 on an interior wall at the Chase Community Center of law school at South Royalton.

â€œSince at least 2001,â€ Crawford noted in his ruling, â€œVLS has received complaints from students expressing unease with the murals,â€ particularly their â€œcartoonish, almost animalisticâ€ depictions of reduced African peoples. in slavery. “

Law school officials offered to paint over the murals last year, but Kerson objected. He filed a complaint in December 2020 to prevent the murals from being covered. Any attempt to remove the murals from view constitutes a â€œmodificationâ€ of the art under federal law, known as VARA.

The law school argued that covering the murals does not violate VARA because the murals will not be altered or destroyed, but only removed from view. Plus, no one can be coerced into showing art they disagree with, law school attorneys argued.

“I think the tribunal is absolutely correct and we are delighted that the tribunal agrees with us that VARA does not force an owner to display a work of art against their will,” Justin Barnard , a Burlington-based attorney representing the law school, said Friday.

While Barnard said he was not surprised Kerson said he would appeal, he called Crawford’s reasoning “good” and said the lower court’s decision was likely to stand.

In a statement, attorneys for Kerson, Steven Hyman of New York and Richard Rubin of Barre, VT, claimed that Crawford was unaware of VARA’s clear intention, which is “to preserve our cultural history and to protect honor and reputation of the artists who contribute so much to this story.

From this perspective, VARA encompasses more than the simple circumstances in which murals can be hidden, but the question of what is lost when public art is removed from view. VARA takes into account the moral right of an artist not to have his reputation or honor diminished by the treatment of his work.

“The unwavering intention of the law school to bury these murals – acknowledged to be of recognized stature – behind a wall so that they can never be seen again is clearly both an affront to the honor and Mr. Kerson’s reputation, and the values â€‹â€‹to be preserved. by the Visual Artists Rights Act, â€Kerson’s lawyers said in their statement.

An appeal would bring the wall dispute to the scene of a VARA case that Hyman, a former president of the New York branch of the American Civil Liberties Union, argued a few years ago. He represented Arturo Di Modica, who created the Charging bull sculpture in Lower Manhattan that has become a symbol of trust on Wall Street. After Fearless girl, a bronze statue of a young girl, was installed in front of the bull, Di Modica filed a lawsuit, accusing her copyrights and rights under VARA had been violated because the statue of the girl had changed the meaning of his work. Fearless girl was moved in 2018, resolving the dispute.

Kerson forwarded his attorneys’ statement and declined to comment further on Friday.

Efforts to reach Jameson Davis and April Urbanowski, VLS students who circulated a letter and petition opposing the murals, failed on Friday.

Opening of the Arbogast performing arts center in Troy

“Life and art are a matter of risk”: Gabé Hirschowitz, hip art…